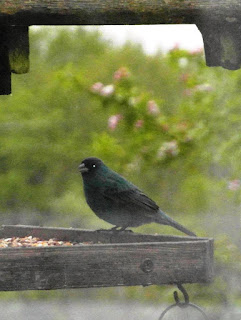 Once more a mega-bird has been recorded by some back-yard birdwatchers.
This bird was photographed in a back garden near Llansadwrn on monday evening. It was present from 7 - 8pm when this photo was taken. This is a cropped record shot, taken through a window of the bird on a bird-table which is a few feet away (taken by the observers). The bird was looked for and not seen on Tuesday and Wednesday.Although it looks quite greeny in this photograph, the observers described it as a bright-blue finch! It appears to be in good condition in this photo and didn't have any rings on it's legs. Indigo Buntings are found in captivity in the UK and Western Europe, but the last time I checked they were retailing at around £400 a pair, so I presume from this that they are far from common in aviculture.
They are long distant migrants migrating from North America to Central America/The Carribean and Northern South America for the Winter. So this bird has good credentials for a trans-Atlantic vagrant, presumably in the Autumn, which is now moving north from wherever it had spent the winter. It's a massive find for the couple who spotted it,  well done! It's just a shame it didn't hang around long enough for any birders to see it!
Posted by Stephen Culley at 21:32

This multi-contributor blog is a reel of North Wales bird news, ID discussion, and any other trip reports and useful information added by birders regularly out in the field. Please contact me at: robinsandham (at) hotmail.co.uk if you want to contribute or report any notable sightings.